June 04, 2011
It's not my first time to the US and I'm really not much into doing the tourist thing. Like the previous times I've been to the US, usually it's a business trip (except my first one, which was really a vacation). This business trip though doesn't feel like business -- and there's only one reason why: Google. 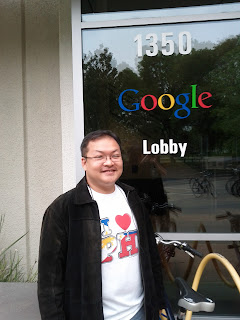 If you've followed my postings recently you will know that I'm now working in Google Australia. Part of that work is going to the Googleplex for required training and the requisite meeting the team. This three-week trip was a chance for me to get assimilated to the larger Google and all I can really just say is: wow.

Wow because the environment is so conducive to solving problems.

Wow because it's so humbling to be around great minds solving great problems.

Wow because I never thought finding my dream job would come true.

One of the best things with seeing the world and finding out more about the different cultures you can get into contact with is that among other things, it puts things in perspective. Having worked in startups, huge companies, and practically everything in between, it's very easy to get jaded. One day though in the Googleplex -- actually, usually Fridays -- and I've seen how a startup culture in a huge company makes a world of difference.

Coming from the Philippines to Sydney then spending a bit of time here in Mountain View, it's easy to lose sight of how good things are going. It's almost too easy to complain about the weather, craziness in government, many issues that people are still dealing with in the here and now. Because of the perspective I've gained though being so blessed as to be working in Google and having an opportunity to make a difference in my own little way to arguably the most awesome tech company there is, I've found that the road I've had to take has been long and arduous -- which makes being in Google so much sweeter. 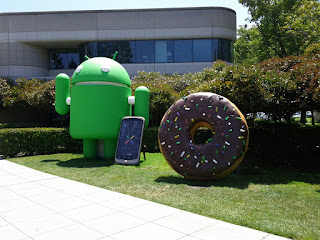 Rather than pointing out any single awesome thing I've encountered in my three weeks here, I'd rather point out the reason why I do what I do -- to remind me, and also to share with you my dear reader. For me, it's really simple: be the best person I can be, contribute as much as I can to efforts that matter to me, be the best father and husband I can be, and become an inspiration to others who may see my story. I wouldn't say that I would like this to be my legacy but rather say that this is pretty much my mission. Being in Google puts me I think in the best position to be able to accomplish my mission or at least work my way into being in a position to make a difference.

I want to remember this trip as the trip where I had my eyes opened and my soul revived. This trip is the most fulfilling trip for me yet.

It's bitter sweet though because I've had to be away from my inspirations -- my wife and daughter -- while I'm here. I miss them dearly and I'm ready to call this trip a great one and would love to go see them as soon as possible.

August 05, 2004
Nope, this is not an academic post. More of a reflective and wrote-because-i-was-enlightened type post. Anyway, I just passed a paper on Rizal's notion of a nation according to Quibuyen (a local writer who devoted a book -- A Nation Aborted -- on his treatise on Rizal). Chapter 6 was an interesting read, and a definite eye opener. Rizal all of a sudden became interesting, especially to someone like me who could care less. It seems that most of what Rizal aims for and wrote about is still evident in today's Philippines as I see it. I wonder why I didn't get to appreciate Rizal and his work when I was still in high school -- might be the fault of the high school and the curriculum, or might be because I was still considerably immature then. I wasn't able to understand most of Rizal's writings though even if I got to reading them basically because they translated from Spanish to Filipino/Tagalog. I don't have problems with Tagalog, until you put it in writing. I
5 comments
Read more

July 31, 2005
Everyday, I am getting fascinated more and more by the technology literally in the palm of my hands when I look at and use my cellular phone. Thanks to the ingenuity and vision of the makers of the Sony Ericsson K750i, I enjoy the features that make my life a little more enjoyable and bearable amidst the hectic schedule I have. Like the fact that I can actually access my email from my cellphone using IMAP4+TLS/SSL?! If only it wasn't so darned expensive to access information through the SMART's GPRS network... Anyway, this is how my dad's cellphone looks like (treated at an angle up close and embarassingly personal). I wanted to see how it would turn out treated as a subject in black and white. I don't know why I feel that the omnipotence and omnipresence of anything is best captured using black and white photos. I feel that it preserves the object, but takes out the frills and color otherwise distractions to the scene. I feel that it also allows me to capture what is
8 comments
Read more