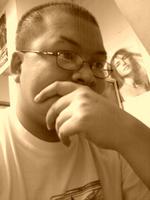 I love my new phone! It has everything I've ever wanted, and thanks to my dad and the power of the improved banking system, I can actually afford one. I'll be posting some pics I snap up from time to time, and I'm still looking at a better way of uploading them using my phone as compared to linking it up to the computer all the time to upload it.

And guess what -- interfacing the phone via USB is possible on Linux! So I actually get to carry around a diskette (or a couple dozens of those pesky little buggers) around in my phone! Sony Memory Stick Duo's aren't cheap, but I guess my extra money will go to those little life savers. Good thing about it is the 2.0 megapixel camera which takes impeccable high-resolution images.

And did I mention that I can get the photos in Linux?! I can actually access the memory card in the phone as a removable mass storage device -- and copy/paste files like on any regular device! No need for me to invest in a separate USB storage device.

And it has a built-in FM radio with fantastic surround sound earphones.

So I get a camera (2.0 megapixel which is REALLY GOOD) which is a phone (with all standard messaging and calling functions) and a multimedia (MP3, MPEG, and JPEG/GIF) mobile station which also doubles as a walkman (FM radio tuner). And it looks uber cool to boot -- my dream phone at last.

So now you can look forward to seeing more pics on the site. ;)

There's me up late at my cousin's shop. Wouldn't this be really neat if I did this everyday? ;) 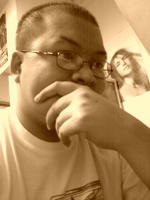