Day out at Circular Quay!

May 07, 2011
This day was tons of fun! There were quite a number of firsts for the family since we've arrived here in Sydney. Exploring as a family is so much fun, I wonder why we didn't do much of this while we were in the Philippines! 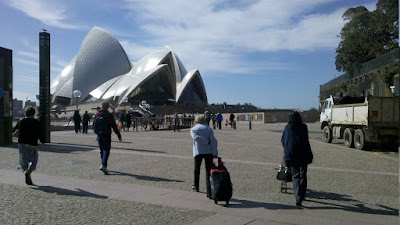 Today Jeni, Julia, and I went on our first train ride from Town Hall Station to Circular Quay. That wasn't a very eventful train ride and it's pretty much your standard fare going to Circular Quay but we did get some hiccups on getting the tickets and getting through the gates at pretty much all the stations. We still have to get used to the idiosyncrasies of the Australian train system.

Next stop for us was the gallery walk. Jeni loved this very much mostly because now we know where to buy the high end stuff we're still not rich enough to afford. Of course we can always dream. ;)

Then there was the Sydney Opera House. The view was magnificent from the wharfs and the nearby park. We had Hungry Jack's for lunch which is basically Burger King with a different name. We had good fun with the birds at the park too before we headed off to see the Opera House up close and personal and from the inside.

Julia had so much fun outside the Opera House that she could hardly contain her enthusiasm!


That was loads of fun. Afterwards we all then had Ice Cream, which Julia thoroughly enjoyed. 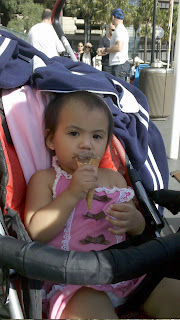 If every weekend would be this much fun I can understand why the Sydney-siders have the most awesome attitudes of all the people I've been around in the world.

Cheers from down under!

January 20, 2021
I have been keeping a journal for my personal life with some regularity for the good part of 4 years. The difference between my earlier attempts at journaling before four years ago is the regularity and the structure. I started with a very structured and regimented journal (doing it everyday with prompts and blanks to fill), to a ruled journal notebook, then a plain notebook (no rules nor grids in the pages), and then settling on a dot-grid notebook. This allows me to doodle and write free-form to help me commit thoughts and observations of my day but it was mostly for archival and looking back to "feel good" or reminisce (also to sum up a month, a year, etc.) The approach helps a lot with self-improvement in terms of my mental health and my reflection to see where I was a specific amount of time ago and whenever I was reading it again. In a previous post I wrote about keeping a work log, and I realised I only mentioned that in passing. In this post I detail the structure of
Post a Comment
Read more